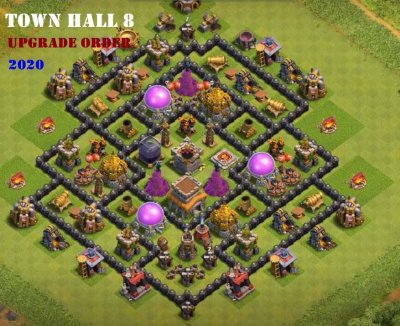 Continue reading here Town Hall 8 Upgrade Order with a lot of updates in the COC game in 2021 the improved and best upgrade order is given below follow this guide completely to upgrade your Town Hall8.

Why town hall upgrading is important in clash of clans

losing time and resources can be very frustrating as it can severely impact your gameplay. To avoid this, keep upgrading buildings and defenses that is very much important in COC. No matter at what level your base is so just keep making progress and strengthening your defense is a great way to progress.

First of all, knowing the right upgrade order for your new town hall is important. A lot of things have changed in the last few years for TH8. There are two things you need to remember before you move on to the new TH8:

Laboratory is always the first priority for every town hall level. I always recommend my viewers to upgrade the laboratory first. The laboratory can be upgraded while a troop is being done in it so put a troop on upgrade and start the upgrade to level 6 laboratory. Level 6 laboratory will unlock better upgrades for troops. Level 5 Barbarians and Archers are good for taking loot from other bases. Along with that, you will receive an upgrade for dragon too. Level 3 dragons are really good to 3-star fellow TH8s.

Clan castles are really important for warmongers. The extra troop space is absolutely essential for both offense and defense. I highly recommend upgrading the clan castle. You can hold 25 troop spaces at TH8 with maxed out clan castle. Clan castle should always be prioritized after the laboratory.

At TH8 you get a brand new gold and elixir storage and I recommend you to max them as soon as possible as you will need a lot of gold and elixir to upgrade defenses and troops.

It is recommended to get the elixir drill to level 3 as quickly as possible because town hall 8 is heavy on dark elixir, especially in the laboratory. Most of the people rush to TH9 because they don't have the patience to farm dark elixir to max out their town hall 8. It is kind of free loot. You log in and collect free dark elixir from drills. It is not much but it is worth it.

The dark elixir storage gets two new levels at TH8. Increasing the capacity of your dark elixir storage is very important because your king upgrades are going to get more expensive. Hog, Valkyrie, and Golem upgrades are also expensive so what you need to do is to upgrade your drill and storage first. You can change the order of elixir drill and storage upgrade as you like but it is recommended to upgrade them as soon as possible.

Barbarian King is strongest of them all. Take him to level 10 as early as possible as it is key to winning wat attacks. Level 10 Barbarian Kings gets to level 2 ability. I always prioritize BK over other upgrades as I like to use him in my attacks and I will recommend it to you too.

It is recommended to get the new walls and upgrade them to existing walls level. It is zero second upgrade but you need to pour some gold in them to upgrade them. Keep upgrading your walls with extra gold you have. You will need those walls to build a better design so you can defend against attackers in a lot more effective way.

Build all the new defenses you get and upgrade them to the existing building's level. Use one of your builder on new buildings. This includes Dark Barrack and Dark spell factory. Dark spells are good enough to help you in different attacks. Earthquake spell can be used to make way for your troops. Poison spell can be really helpful in killing CC troops in the war. Traps can't be neglected they are an important ingredient for a good war recipe(base). You will get a seeking air mine which is brutal against dragons. You will also get skeleton traps which aren't that bad.

At TH8 you get access to P.E.K.K.A. P.E.K.K.A is an important element of GoWiPe attack strategy. GoWiPe is a complex strategy but if done right it promises you a three-star. Upgrade all of your barracks so all of them have P.E.K.K.A unlocked in them. Don't upgrade more than one barrack at a time because it will slow down the troop making process which will hinder your progress for a few weeks.

Air defenses should be your no.1 defense priority because air attacks are common at TH8. You need to defend against level 3 dragons. It is recommended to upgrade one air defense at a time.

Hidden teslas get three new levels at TH8. They are going to take plenty of time but they are worth it. So again it is recommended to upgrade one tesla at a time.

We have four mortars at TH8. I recommend you to upgrade one mortar at a time. Mortars are good against Barch and GiBarch attacks. Considering you have five builders so now you have an Air Defense, a Tesla and a Mortar at the upgrade.

Bomb towers do a lot of death damage which makes them very effective against hog attacks. The reason Clash of Clans bought bomb towers to the game was to overcome hog attacks. Get them done so you don't need to worry about hog attacks.

Archer towers get two new upgrades. They have a good amount of range and attack both ground and air troops so start upgrading them as soon as possible. They are definitely worth it. So must consider them in your plan.

Cannons have a lesser range and they attack only ground troops but they still can't be considered useless. Cannons can protect your base against ground attacks such as GiBarch and GoWipe. So include them in the attack strategy.

Air sweepers are a very effective defense against dragons and balloons. They can change the path of air troops and can completely ruin an attack. Air sweepers are a nightmare to air attackers so upgrade them too before going to TH9.

The reason I put them at the end of the priority guides because they don't generate much resources. Upgraded mines and collectors won't make any difference in your base so I put them at last.

Upgrade the traps so you have everything maxed before moving to new TH level. They won't make much difference but maxing out everything is recommended.

With your third (and ideally fourth) manufacturer, you can pursue getting down every one of the new guarded constructions accessible at Town Hall 8 so we can rapidly run after a decent base design. Start by putting your 50 new dividers and building the three new pinnacles (not including the new Hidden Tesla). Then, add the new Gold Storage and Elixir Storage structures.

When you have these constructions down, you can revamp your base to coordinate with my suggested Town Hall 8 Farming Base Layout. Simply leave the Hidden Tesla space void until further notice. In the wake of setting up the new base, feel free to have the developers begin to redesign all of your Gold and Elixir Storage constructions to max level.

At a few focuses in th8, you will have full solution stockpiles, with nothing to utilize it on. That happens to everybody. Additionally, your exploration lab takes the most time through th8, so dont be hesitant to allow your developers to have a break.

Fanning out your assets among three stockpiling focuses rather than only two focuses makes it a lot harder for adversaries to get all of your plunder on account of the plunder cap framework. Note that at Town Hall 8, the most a foe player can take from you is 300k of every Gold and Elixir. If you have only two Gold and Elixir stockpiling units, every one will surrender the rival to 150k assets each. If you have three units of each sort, every one will just provide the adversary with a limit of 100k assets each. Adding additional capacity structures makes it a lot harder for the rival to get your plunder. Redesigning these asset stockpiling structures early is substantially more about ensuring your plunder than it is tied in with getting more extra room.

Tips: Buy everything you need and bring it to the base also collect your free resources first as free gems can be found in in the mushroom clean up the base and upgrade the stuff that you have.

Conclusion: So keep upgrading and coming up with new strategies with most of your available resources can make you upgrade smoothly in Town Hall 8 base. Which will also unlock many new features for you in the Clash of Clans.

In an optimal world, you will actually want to spend Gold and Elixirs at a comparable rate, keeping each of your Builders occupied, and completing each redesign in a synchronized way. Notwithstanding, as we probably are aware, the ideal world doesn't exist, and in all likelihood, a few overhauls will be ahead and some behind. Remember them when cultivating, as more often than not, you should pick between weighty Gold, Elixir, or Dark Elixir cultivating targets.

Try to have everything updated prior to going into Town Hall 9. Dismissing it will place you in a difficult spot in cultivating and battles to come. Be ready - DE toil for Heroes overhaul at TH9 is unbelievable. You will have 20 degrees of Barbarian King and an astounding 30 degrees of Archer Queen to go up! Accomplish some work prior, with the goal that you dont need to get back to it later on.